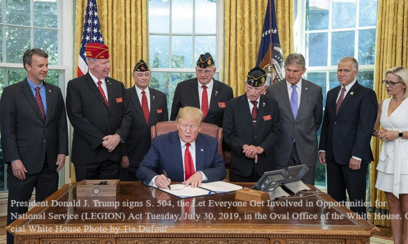 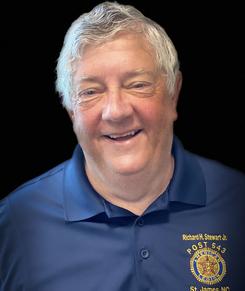 ​​​​​​​​MOST VETERANS NOW ABLE TO JOIN THE AMERICAN LEGION

to join the American Legion was signed into law on

declares that the United States has been in a

continuous state of war since December 7, 1941.

LEGION is an acronym for "Let Everyone

Get Involved in Opportunities for National Service Act."

Prior Legion rules said you could only become a member if you served during one of seven times of combat. Now there are only two times of declaired war: April 6, 1917 to November 11, 1918 and December 7, 1941 to a time in the future to be determined by the Congress.

The American Legion sought the declaration as a way to honor approximately 1,600 U.S. servicemembers who were killed or wounded during previously undeclared periods of war.

The LEGION Act also opens the door for approximately 6-million veterans to access American Legion programs and benefits for which they had not been previously eligible.

An updated Post 543 membership application is now available by clicking on the link at the bottom of this page.

Veterans who wish to join St. James Post 543 may simply attend one of our regular meetings which are usually held at 7pm on the 4th Wednesday of the month at the St. James Community Center on the Southport/Supply Road (Route 211).*

*The November and December meetings may be moved because of the holidays.

Our Post launched into the new fiscal year starting on July 1st  2021. The demand for our services grows and is fulfilled with your membership and volunteerism.

To continue to be successful in serving others we need you!  Please consider renewing your membership as soon as feasible.  You can bring your check to our next meeting on September 22, 2021 at the St. James Community Center (Meetings start promptly at 7 PM) or mail your check payable to American Legion Post 543 for $35.00 to: